Riot at the Times

I was so excited to be part of The New York Times‘s multimedia package on Bikini Kill and Riot Grrrl, I forgot to blog about it. I co-wrote with Elisabeth Vincentelli the main piece, the essential Riot Grrrl listening guide. And I got to write about my first Bikini Kill show and their first show in years. And I took part in the Popcast! Plus there are historic videos of 1990s Bikini Kill shows by my grrrlfriend Lucretia Tye Jasmine. PRDCT!!! 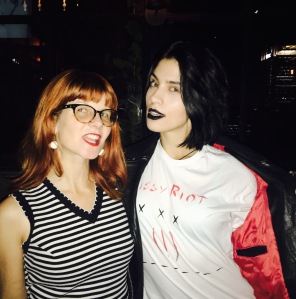 Last night was a queer punk rock feminist dream come true, hanging with and hearing some key gender game-changers, past and present. First, Allison Wolfe and I went to the Ace Hotel, where Nadya Tolokno of Pussy Riot was holding court. It was the first time the original Riot Grrrl had met the original Pussy Riot girl, so that was a bit of a moment. We also ran into Mukta Mohan and Gabrielle Costa of the very cool Honey Power female DJ collective. Lots of girl power on that rooftop last night. Tolokno showed her three new videos, in which Putin’s least favorite punk raps and grooves. The former art student is pursuing a more Madonna/Peaches/PJ Harvey groove than the band’s former anarcho thrash. The videos are very sexualized, and bloody. Allison will be on a panel with Maria from Pussy Riot Monday night at the Regent, so she is on the full PR tour this week.

Afterwards, the Sex Stains goddess and I trucked up to USC, where we caught the second half of the Trans/Gender Tipping Point event organized by Jack Halberstam and Karen Tongson, two scholars whose work is not just analyzing but leading the discourse on gender variance. Four members of the Transparent artistic team talked about that show’s, er, transformative effect on trans visibility, television, and their own lives. Director Silas Howard, producers Zackary Drucker and Rhys Ernst, and actor Trace Lysette also discussed how the show could go even further, including having feature characters who have fully transitioned. Howard, for one, is optimistic the show will continue to break ground, saying of Jill Soloway’s Transparent team, “Whenever they’re most afraid, they most bravely go forward.” Stay tuned.

Some students asked me recently what the best part of being a journalist is, and I would say it’s being a witness to the making of history. Being in a room with Howard and Wolfe again, a couple decades after we were all first connected to Revolution Girl Style, or watching Allison and Nadya talk, or being dazzled by Lysette’s simultaneous poise and vulnerability — it felt like another of those nights. That’s my blessing as a journalist; my job is to tell you about it, which I just did.

Even if noone shows up (well, actually, we’re expecting full houses), the Grrrls on Film festival will have been worth doing just for the way Hannah Ongley gets at the issues, and features a range of female directors, in this wonderful i-D story.

Filed under Grrrls on Film, Press

Here’s the poster for Grrrls on Film, designed by the brilliant Sharon A. Mooney. You may notice a couple changes in the schedule: Floria Sigismondi is on a shoot and will not be at the Girl Power panel Friday night, but will join us later for the screening of The Runaways. Also, the order of a couple of the events on Saturday got flipped. More announcements to come!

Filed under Events, Grrrls on Film, Queens of Noise

I know I’ve been fairly quiet the last few months. Never fear: I have been busy. Along with my LMU colleague Sharon Mooney, and several other students and faculty, we have been planning. Plotting. The official announcement doesn’t come for a couple weeks, but I wanted to let friends, followers, and family know about this incredible event we are putting together:

Grrrls on Film will be a weekend-long cinematic celebration of the feminist act of making noise. From the experimental movies of Lizzie Borden to Riot Grrrl documentaries to the rockudramas of Floria Sigismondi, this festival will offer a multi-decade tour of ways in which women have used the sonic, stylistic, and political tools of punk to create modes of expression that subvert gender and transgress genres. Grrrls on Film draws on both movies made by female directors, including Penelope Spheeris, Alix Sichel, and Abby Moser, and movies about noisemakers, such as the Bags and Bikini Kill. It particularly offers a triptych through LA punk, from the pioneering efforts of the Runaways, through the emergence of hardcore, to the Go-Go’s pop breakthrough, to Riot Grrrls’ reclamation of Southland moshpits. Many of the directors and musicians as well as other cultural and gender studies scholars will be on hand during the three-day festival to present and discuss these seminal works, which have never before been presented together. Student-made videos will also be shown.

Grrrrls on Film is a collaboration among faculty of the Bellarmine College of Liberal Arts, the School of Film and Television, and the College of Communication and Fine Arts at Loyola Marymount University. In addition to screenings and director’s talks, there will be a concert sponsored by KXLU and expert panels featuring filmmakers, musicians, and scholars. Organizations that promote and support women in film, music, publishing, the arts, and academia will be on hand to provide information and resources and present workshops on topics such as how to make fanzines, shoot video, or repair bikes. With the film industry under governmental and media scrutiny for gender and racial bias, we think it’s a great time to explore the history and future potential of Girl Power.

Open to the public, and free! Book your flights now.

http://www.npr.org/player/embed/377196871/433514653
I’ve always thought of Kathleen Hanna as a philosopher, not just a rad punk artist. She proves it once again in this interview for NPR, where she talks about the perils of outsider elitism and her admiration for Beyonce: “Whenever you’re trying to be the opposite of something, you’re just reinforcing it. We’ve got to be something totally different.”

The occasion for the interview is the release of the Bikini Kill demo tape on Sept. 22 for the first time in multiple formats. I remember getting that tape when I was music editor at the SF Weekly. I can admit now that I didn’t appreciate it that much at the time; I thought they were retreading Mecca Normal and X-Ray Spex, admittedly two of my favorite bands. (That year I named Mecca Normal singer Jean Smith my Person of the Year.) It took seeing them live at Gilman Street Project to realize the true force of Kathleen Hanna, Tobi Vail, Kathi Wilcox, and Billy Boredom. My intern, Sia Michel, was much smarter – I think she might have nabbed that tape. She’s now the editor of the Arts & Leisure section of The New York Times — told you she’s smarter than me.

I’m so glad this music is coming back out and a new generation can appreciate it. I’ll be starting my First Year Seminar (Revolution Girl Style: Punk Feminism, Then and Now) next week as I always do: Playing Bikini Kill’s call to action: “We’re Bikini Kill, and we want Revolution Girl Style Now!” Then I’ll go see Kathleen and her new band, The Julie Ruin, at Burger a Go Go.