Last night I saw three generations of the Partnoy family present their creative works at LMU. Matriarch Raquel showed slides of her paintings and talked about what it was like to have a daughter “disappear” in Argentina. Poet Alicia had one of her daughters, a LMU senior, enact a story about her time in an Argentine “concentration camp.” Then another daughter, Ruth Irupe Sanabria, read some very intense poems, including one about the uncle who committed suicide during that reign of terror. The Bellarmine Forum is presenting some remarkable women all week. I’m moderating a panel on hip-hop Friday at 1. 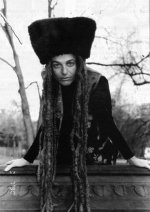 “The mud album came up because we’d been in the countryside recording, and we were eating, eating, eating. We weren’t usually that fat, but we said to hell with it, so we look a little fat on the album, so what. Point was to show that we’re naked and free and tribal.”

Almost a decade ago, Ari Up and I were walking the streets of Flatbush, Brooklyn. She was telling me about the germination of the Slits’ famous Cut album cover in 1979, which featured the all-girl English band naked and covered in mud. The music inside was equally provocative and primal: a bass-driven funked-up art version of reggae. The Slits were considered punk pioneers, but “the real punks didn’t even call ourselves punk,” she told me. The Slits were undoubtedly feminist ground/ball-breakers. “We were still suffering, even though we were able to come out and put our foot down due to the explosion that was happening. We still had all the females’ problems, like ‘Oh you’re not sexy enough, not tame enough, you bunch of people look like animals, you look filthy.’”

Keep in mind that Ari was 14 when the Slits started, and she was upsetting the apple carts of the music and media industry. Imagine Miley Cyrus posing naked on the cover of an album smeared in mud and calling herself a vulgar name for her genitalia. Okay, maybe don’t. I knew intellectually what an early starter Up was, but I didn’t really understand it emotionally until Wednesday night, when I found out that she had died at age 48. Ari was only two years older than I, and yet in the days of that interview, when we hung out quite a bit, I looked up to her as this amazing legend, this whirlwind of long dreadlocks with her strange German/English accent and bright outfits. This video captures that Ari well:

It’s a cliche, but Ari really did pack more living into those 48 years than the rest of us would experience in twice that time. The Slits blazed a trail that also burned its members; her memories of that time, as told to me, were painful. She fled to the jungle to recover, living in Belize and then Borneo, with the Dyak Indians. Then she became a dancehall dancer in Jamaica: Madussa (I spelled her name wrong in my BB Gun story), queen of the raunchiest moves, as you can see in this last Slits video, released this week:

That video was shot the last day I saw Ari, less than a year ago, when the Slits played in LA. She was crazy as ever that night, in her bright pink Madussa outfit. Her twin boys were there. (My other BB Gun gaffe was to say she had two daughters.) I hadn’t met them before, but my daughters once babysat her son, while we went to an Ari show, with our dear mutual friend Vivien Goldman. She seemed especially stressed and tired that night last year but happy to see me for the first time in several years. I promised I’d get in touch again, but I didn’t, and now I’ll regret that forever.

Ari called me many years ago on Valentine’s Day, after I had moved to Miami and we hadn’t seen each other in a while; she was contacting all her female friends to send her love. Wild girl that she was, she was also caring and affectionate. She was no angel; it took a lot of energy to hang out with her. As I recounted in BB Gun, the cops got called to the club one night we were together and she was throwing a fit. Ari had a fierce sense of herself and her right to be who she wanted to be. That’s what I admired about her most, and why her death is such a loss.

You can read my BB Gun interview, from issue #5, here. If you don’t own Cut or the Slits’ BBC Sessions or the Slits’ 2009 album, Trapped Animal, buy them and listen now. I’m lucky enough to have a copy of Ari’s solo work from the turn of the millennium, and I’m chanting her prescription for an ideal partner over a funky reggae beat: “A bad boy to society, a lover to his family .” It’s no substitute for her in person, but now, it’s all I have.

Raul Esparza, star of the current Ahmanson Theatre production Leap of Faith, is as engaging as he is deep. Last week, in an interview for the LA Times, we bonded over our loves of Joan Jett, Jonathan Larson, Virginia Woolf, and Cuban coffee. Neil Pepe, artistic director of the Atlantic Theatre Company in New York, told me Esparza is one of “our great American actors.” My piece runs in the Times tomorrow but is online now.

I first saw M.I.A. about five years ago in Miami and have loved her since. As then, she can rock a house like few others — her politics are secondary to the pleasures of the dancefloor. The sold-out crowd at her Mayan show Thursday was full of women and gay men, who clearly find her inspiring. I reviewed it for the LA Times.

Brooklyn-based writer Sara Marcus did something I’ve thought of doing, but never had the balls: wrote a history of Riot Grrrl. She did a damn fine job and I said so in the LA Times. Let the hateration begin.

The Beat Goes On

And so it begins …

Cole, 7, bought his first magazine today. Tiger Beat. He sat down and devoured it cover to cover. Justin Bieber is his Donny Osmond.

Finally, I’ve seen Lady Gaga live, and I have seen the light. With Yoko Ono, no less. Check out my LA Times review of the Plastic Ono Band show at the Orpheum. I’m just so sorry I missed Iggy the night before.