Bangles, Caillat at She Rocks Awards

I’m sorry to admit that I’ve become somewhat used to going to women in music networking events that are anemically attended, retro in stance, and generally pathetic. So I was astonished to walk into the Pacific Ballroom at the Anaheim Hilton Hotel Friday night and find the cavernous space filled for the She Rocks Awards. Then again, the whole Disney area was crawling with aging rockers in hairpieces and bemused tourists as the NAMM Show shrugged off measles fears for some serious deal and hangover making. I wrote about She Rocks for the Los Angeles Times; I’m very proud to have gotten the phrase “hairy-knuckled sausage making” in there.

I went there to mourn the passing of a man who helped me and others a great deal. I wound up writing about Kim Fowley’s funeral for the Los Angeles Times.

Joan Jett thanked Kim Fowley for helping make her a star at at today’s funeral for the man who discovered the incoming Rock’n’Roll Hall of Famer when she was just 16. Joan was one of many music legends (albeit the only ex Runaway) at the thoughtful and sometimes hilarious memorial at Hollywood Forever Cemetery. It was a surprisingly tender and moving event, marked by funny and somewhat scandalous anecdotes, sincere tributes to a colorful legend, and emotional appreciations of his young widow Kara (Wright) Fowley. More to come.

Cuepoint — the music magazine at Medium.com, edited by Jonathan Schecter — published an excerpt from the Kim Fowley chapter of my book Queens of Noise: The Real Story of the Runaways.

Rock’s Backpages editor Barney Hoskyns at one point was working with Kim Fowley on his memoir, so it’s no surprise that the archive published a package of print and audio clips about the late maestro — including my own LA Times piece from 2012. Randy Lewis’s LA Times obit also quoted heavily from that article — and Randall Roberts grabbed a nice quote from Queens of Noise in his apt remembrance.

Neda Ulaby has penned a lovely obituary of Kim Fowley for NPR; the audio version will air on Weekend Edition. Good line: “Checkered barely begins to describe Kim Fowley’s long, crazy career in music.” She also quotes me in it. 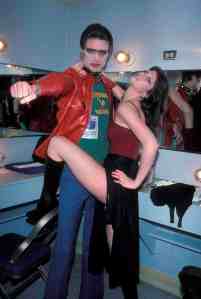 Photo of Kim Fowley and Jackie Fox by Brad Elterman

I wish I had not had to write this, that Kim were still here. But I am also happy that I got to know this man, and I hope that I have paid his legacy its due. He may not have been a nice man, but he was a great man.