I talked about the death of Dolores O’Riordan, and the recent spate of deaths of musicians of her era, with the great Lynn Ballen on her Feminist Magazine show on KPFK. You can hear it here:

In either late 1994 or early 1995, I interviewed Cranberries singer Dolores O’Riordan for Interview magazine, over the phone. The article ran in the March 1995 issue, as an edited Q&A. When she passed away Monday, I dug up the old transcript; following is the unedited interview. She had just gotten married and the band had released their second album. It’s poignant, and powerful, to read now.

EM: You’ve had more success in the U.S. than in England, haven’t you?

DO: It was hard to take off here because of bad marketing, I think. The two singles were released on a demo a year before they came out as singles, so most of the press had already heard them. They’d hyped up the band a year prior to the release of the debut. So when the debut came out it wasn’t anything new to the English public. They started going against them, backlashing, saying the demo was better and whatnot.

EM: How is the English press treating you this time?

DO: I don’t really read them anymore. The band’s happening around the world, everywhere except Japan. So at this time in my life my perspective is more global, so I’m not really worried what an English paper says, or what an Irish paper says.

EM: Are you at all reluctant to do interviews?

DO: No, but I suppose I’m getting a bit cagier.

EM: Where are you living now?

DO: In the south of Ireland. I’m building a house there overlooking the sea. It’s really quiet and peaceful. We haven’t actually started building, we just got planning permission.

EM: Are you building a dream house?

DO: Yeah, it’s a nice big house. I’ve never really been that type of dream-house person, ‘cause I never grew up with too much materialism around me, so it wasn’t as if I longed for it. The idea of having a gymnasium in your house, or a bar, would just not be in my mentality, because you don’t see it that much. But as you travel and stuff, you realize you can’t go out to public places that much, so you put it all in your house — your own little gym and your bar, everything you need in there. You can go there for peace and tranquility, when you need to get away from everything. END_OF_DOCUMENT_TOKEN_TO_BE_REPLACED

Dolores O’Riordan had one of the most distinctive voices in rock’n’roll: an angelic brogue, like a rose and briar entwined. “I grew up with a very strong Irish accent, and I didn’t see why I should put on airs and graces for anything or anybody,” she told me when I interviewed her for Interview magazine more than two decades ago. You can see that article below; I’m working on getting the whole transcript typed up (feel free to contact me if you’re a Cranberries fan and would like to help out). You can also hear a snippet of what I told NPR’s Andrew Limbong about her. 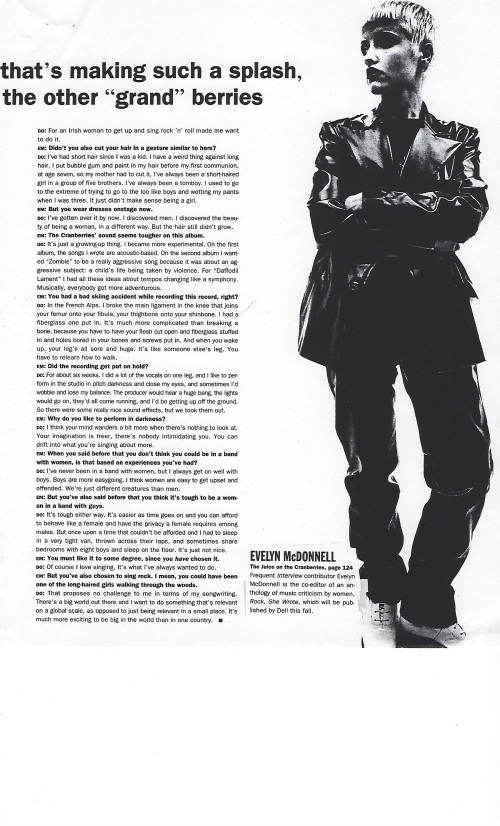 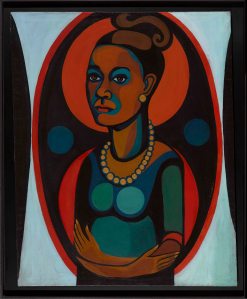 Faith Ringgold was already an accomplished artist in her forties when she wrote a memoir of her life. Still, no one would publish it. Instead, the painter turned to a new medium, creating quilts that — via images and words — told the narratives not only of her life, but of other black women. “I decided I would write my story on my art,” she told the crowd packed into the atrium of the California African American Museum yesterday at the closing ceremony for the exhibit We Wanted a Revolution: Black Radical Women, 1965-85.

One of the earliest figures whom Ringgold depicted was Aunt Jemima. When her daughter questioned her inclusion of the controversial syrup idol, the artist said, “She’s a black feminist hero.”

“She’s not my black feminist hero” replied the daughter, Michele Wallace – an acclaimed scholar and author.

Mother and daughter shared the dais at CAAM Sunday, a formidable pairing at an event packed with powerful personages. Before their panel, three women of the Saar family (the Saarority?) stood together: the legendary Bettye Saar with her daughters Alison and Lezley. If, goddess forbid, the CAAM ceiling had collapsed yesterday, a few generations of important, inventive artists and their acolytes and analysts would have been buried beneath the rubble. Then again, these are women who have already busted through several glass ceilings on their own; maybe they would have just weathered the crash then begun making sculptures out of the debris.

We Wanted a Revolution gathers  drawings, paintings, photos, videos, pamphlets, letters and more from a period when Black and female artists were forcibly fighting against their exclusion from museums and the mainstream. There’s Adrian Piper, Lisa Jones, Emma Amos, Lorna Simpson, Carrie Mae Weems, and  more. Many of the artists, including Linda Goode Bryant, Maren Hassinger, Dindga McCannon, and Senga Nengudi, were part of the closing symposium.

The work in We Wanted a Revolution is phenomenal, though the show, which was originated by the Brooklyn Museum, is traveling on. You still have a month to see Salon des Refuses, the intense, imaginative exhibit of works by Lezley Saar also on display at CAAM. Saar’s paintings and assemblages are psychedelic and psychological in their exploration of the unconscious and of alternative states of being. Deconstructing – literally – and then reconstructing books, she breaks down definitions of race and gender. She paints Renaissance portraits of dandies and rebel girls as Edgar Allan Poe might have imagined them, with mushrooms coming out of their heads, or bats for ears. 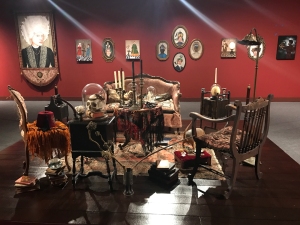 It was moving to think about how Lezley Saar is carrying on the legacy of her mother, Bettye, and how Wallace has dedicated much of her career to chronicling the life of Ringgold. The ghost of the previous generation was in the room as well, as Faith talked about the influence of her mother, Willie Posey Jones, a fashion designer. Mama Jones, as the family called her, helped her daughter make her quilts. Wallace recalled that in her foremothers’ time, all women knew how to sew. But her mother corrected her. “I refused to sew,” Ringgold said. She repeated the statement a few times, emphasizing refused. So, perhaps the most famous quilter of all time was a storyteller, not a seamstress. Yesterday, she made sure her story got told – and we listened.