How I Found My Voice 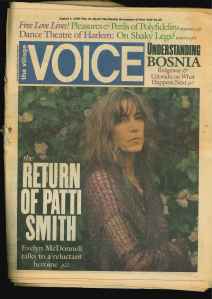 I first became aware of The Village Voice in high school, when my older brother, Brett, used to go the Beloit, Wisconsin, public library to peruse its political investigations and music coverage. We were both discovering punk rock, watching Patti Smith on Saturday Night Live, and we could read about the newest bands from CBGB’s in the Voice. Later, in college, I got assigned to write about it in my one and only journalism class. Within a few years, I was copy editing and writing there, ultimately becoming a senior editor in charge of music. It was a crazy, difficult, exciting place, and the work I did for them — “discovering” Paul Beatty and the rest of the ’90s NYC lit scene bubbling around the incredible Nuyorican Poets Cafe, traveling to New Zealand to write about music, covering Rent as it moved from Downtown to Broadway and beyond, interviewing John Cameron Mitchell and Stephen Trask, the creators of a new musical called Hedwig and the Angry Inch; writing about punk drag artists such as Justin Bond and Miss Guy — still defines me. And then there was my one and only cover story, the first major interview with Patti Smith after her husband Fred died and she returned to the stage — an incredible encounter with the woman who made me want to be a rock’n’roll critic, and move to New York, and dive into the sea of possibilities. RIP Voice. Say hi to Aretha. 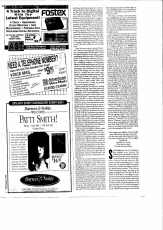 I can’t think of any artist who so masterfully spanned so many decades and genres as Aretha Franklin: gospel, soul, pop, rock, funk, disco, opera. Along with Bob Dylan, I would call her THE towering solo figure of the 1960s and beyond. I’m working on a large piece on her for Billboard’s tribute issue, writing through the tears. In the meantime, critic and novelist Caryn Rose wrote a great tribute to the GOAT a year ago for Women Who Rock: Bessie to Beyoncé. Girl Groups to Riot Grrrl. You can read it now at Salon.  I just wish the Queen of Soul were here to see it.

Filed under Uncategorized, Women Who Rock

Los Angeles journalism legend Patt Morrison argues vigorously and eloquently for the importance of the fourth estate in her book Don’t Stop the Press! Check out my Los Angeles Review of Books review: https://lareviewofbooks.org/article/extra-extra/#!.

Why the Go-Go’s Matter

The Go-Go’s not only deserve to be on Broadway, they should be in the Rock’n’Roll Hall of Fame. Here’s an essay I wrote explaining why they matter, from The New York Times.

Tagged as The Go-Go's