We could feel the waves pounding the shore in our beds. That’s new. For the last six years, we’ve lived in an apartment perched on a cliff above Cabrillo Beach featuring a jaw-dropping view of the Pacific. Often at night, we can hear the waves – especially when the surf comes in, like it did early yesterday morning. We called it our tree-house beach villa. We thought we would never move. 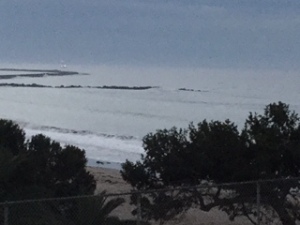 Last weekend though, we did. The stone and glass mid-century bungalow just two doors away went on sale for only the third time in history and miraculously, blessedly, we could afford it. And because being 400 feet from the ocean wasn’t close enough, we slid down the hill 200 feet. Now, we don’t just hear the crashing; we feel it. First, there is the crackling crescendo, as the water starts to fold on top of itself, molecules smacking into molecules. Then BOOM! A big wave pounding into sand sounds like thunder. It shakes the earth.

At daybreak, we were able to visualize what we had been hearing and feeling for hours. We still have a killer view, only now we look out across the ocean more, rather than down on the port of LA. I haven’t seen a swell like this in months. The waves were coming in like a rippling mountain range, forming perfect arcs across the horseshoe of the bay, breaking left to right, east to west in symmetrical rolls that are rare for usually choppy Cabrillo. Amazingly, there were no surfers at dawn. Word got out quickly though, and soon they were pulling up in their pickup trucks and jeeps, wetsuits already on or hastily pulled over shorts as they stood by their vehicles. This was one of my favorite activities at the old place: the peep show of the hot surfer boys barely hiding behind towels as they dress or undress. Apparently, the tinted glass of the new house curtains me as well as the high location of my old office window did; I can still get my voyeurism thrill on. 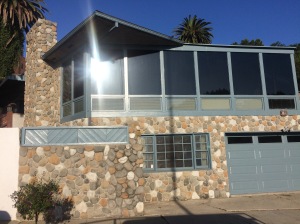 The intensity of the surf doused my own swimming plans. Conditions mandated a board and serious skills. In case I had any doubts, the presence of a lifeguard boat anchored at the buoy off-shore affirmed that this was a serious swell. Even if I had wanted to risk a swim, they probably wouldn’t have let me.

So instead, I watched, from the wall of glass that sweeps across three sides of our new great room (and great it is). Waves smashing into the fishing pier and each other formed 20-foot-high white plumes, rippling all the way across the stone breakwater to the black-and-white Angels Gate lighthouse. The dolphins surfed too, a pod of big and little ones, splashing so high in their frolics I wondered what was going on.

I was born in Los Angeles but moved to Wisconsin when I was four. California remained the golden dream for me as I struggled to fit into small-town Midwestern life. On our frequent visits back to my native land, I would walk through the beach communities visiting families and friends and fantasize that I would come back some day, to a place where I could swim year round. Now I’m living the dream.

It would be easy to spend all day watching the waves, the dolphins, the surfers, the birds. But this is the setting from which I work, not my retirement. It’s the place of beauty to reward that long commute home. I know how fortunate we are to be here (though honestly, as beautiful as it is, our home is also a fixer-upper).  I am the beneficiary of all sorts of privileges, to have landed on this perch, in this room with a view. I don’t take that for granted. I know that the water that is a balm for me is an escape route, or a death trap, for millions of people in danger and in trauma.

I respect the ocean and I cherish it. And I am grateful that when I wake in the night, sleepless and disturbed, worried about the world and my little corner of it, the sound of the waves lulls – and even rocks – me back to rest.

Filed under Flotsam and Jetsam: The Life Aquatic