Riot at the Times

I was so excited to be part of The New York Times‘s multimedia package on Bikini Kill and Riot Grrrl, I forgot to blog about it. I co-wrote with Elisabeth Vincentelli the main piece, the essential Riot Grrrl listening guide. And I got to write about my first Bikini Kill show and their first show in years. And I took part in the Popcast! Plus there are historic videos of 1990s Bikini Kill shows by my grrrlfriend Lucretia Tye Jasmine. PRDCT!!!

http://www.npr.org/player/embed/377196871/433514653
I’ve always thought of Kathleen Hanna as a philosopher, not just a rad punk artist. She proves it once again in this interview for NPR, where she talks about the perils of outsider elitism and her admiration for Beyonce: “Whenever you’re trying to be the opposite of something, you’re just reinforcing it. We’ve got to be something totally different.”

The occasion for the interview is the release of the Bikini Kill demo tape on Sept. 22 for the first time in multiple formats. I remember getting that tape when I was music editor at the SF Weekly. I can admit now that I didn’t appreciate it that much at the time; I thought they were retreading Mecca Normal and X-Ray Spex, admittedly two of my favorite bands. (That year I named Mecca Normal singer Jean Smith my Person of the Year.) It took seeing them live at Gilman Street Project to realize the true force of Kathleen Hanna, Tobi Vail, Kathi Wilcox, and Billy Boredom. My intern, Sia Michel, was much smarter – I think she might have nabbed that tape. She’s now the editor of the Arts & Leisure section of The New York Times — told you she’s smarter than me.

I’m so glad this music is coming back out and a new generation can appreciate it. I’ll be starting my First Year Seminar (Revolution Girl Style: Punk Feminism, Then and Now) next week as I always do: Playing Bikini Kill’s call to action: “We’re Bikini Kill, and we want Revolution Girl Style Now!” Then I’ll go see Kathleen and her new band, The Julie Ruin, at Burger a Go Go.

Following is an approximation of the remarks I made to launch the panel. END_OF_DOCUMENT_TOKEN_TO_BE_REPLACED 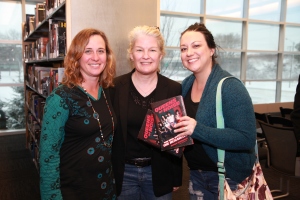 It’s an intimate image, an imagined moment of a deceased artist’s life that became partially real for me last weekend when I saw Cooke’s uke in the vault at the Rock and Roll Hall of Fame and Museum in Cleveland. It was one of many pieces of cultural history I got to witness, even touch, as exhibitions coordinator Shelby Morrison gave me a VIP tour of the climate-controlled room: Chrissie Hynde’s bicycle-club (not biker club) jacket, postcards from Patti Smith, the hat from Lady Gaga’s meat dress. On January 25, I spoke about the Runaways at the Hall of Fame’s Library and Archives (which is housed in a separate building from the museum). Yes, the boys club let the stone thrower in – more on that later. END_OF_DOCUMENT_TOKEN_TO_BE_REPLACED

Bikini Kill’s “Rebel Girl” ranks as one of the best songs of all time. Craig Owens of Chiodos just released a cool cover of it. It’s interesting to hear a guy sing this ultimate anthem of girl love and empowerment. We used to talk about gay singers “queering” the lyrics; is Owens “unqueering” them? Good song, good cover, great causes: Girls Rock Camp Allowance and Equal Rights Advocates. And good timing, considering the current showdown over the Employment Non-Discrimination Act.

Putin can jail their bodies, but Pussy Riot have already reenergized feminists worldwide.

via Pussy Riot and the politics of grrrl punk – latimes.com.

In the 1990s I had the tremendous fortune to hang out with some of the smartest, coolest women I’ve ever known. We bonded over love of Bikini Kill and Tribe 8 and disgust at the anti-feminist backlash. We argued politics, poetry, punk, populism, pretentiousness. We made pirate floats for the Gay Pride Parade and strode topfree down Fifth Avenue.

I was reminded of just how savvy and fearless those sheroes were when I watched Grrrl Love and Revolution: Riot Grrrl NYC, Abby Moser’s documentary about those times. In our late 20s at the time, Abby and I were old to be grrrls. Sometimes, especially as a journalist, I felt like a spy in the house of girl love. But coming up in the rock scene, I had never had sisters like these, and they inspired and amazed me. Abby caught us in direct action: Making music and meetings and zines and readings. There’s Sandra  pontificating like a brainiac. There’s Melissa with her effusive energy. And there’s terrific footage of Kathleen Hanna snarling “Suck my left one” at a pro-choice march in Washington.

Yeah, I’m in there too, looking really dorky at meetings. I’m so grateful these women tolerated my presence. I also got to add my perspective, almost two decades later, speaking as a scholar from my LMU office. Abby’s looking for help getting her documentary out there. I say it’s a must-see, a reminder of what girl power was before, well, what it wasn’t.