END_OF_DOCUMENT_TOKEN_TO_BE_REPLACED

On a musical level, a classic song sung beautifully. On a message level …. YES!!!! And it’s for a good cause (with a stupid name). 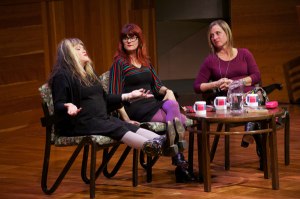 Why do we keep reinventing the wheel? How come every generation of women musicians has to address all over again the confrontation between expression and exploitation, as if a hundred women haven’t gone before them? These were some of the questions raised last night at Queens of Noise: Music, Feminism, and Punk: Then and Now, the Aloud event at the Los Angeles Central Library that I hosted with amazing extra-special guests Exene Cervenka and Allison Wolfe.

Apologies to those who were not able to get in to “the feminist meeting,” as one would-be attendee described the event (according to a colleague). The podcast will be posted next week — and goddess, I hope it goes viral. Of course I’m biased, but, led by an Exene on fire, we addressed crucial issues of the value of and need for women to make themselves heard, not just seen. Riot Grrrl, Rock Camp for Girls, Pussy Riot, the Runaways, X, Beyonce, Miley Cyrus, Kathleen Hanna, Bratmobile, mentoring, self-esteem, Sister Rosetta Thorpe, books, history, documentation, activism, etc. — these were just some of the issues and topics we addressed in a wide-ranging, cross-generational conversation. The audience asked sharp questions. And Exene sang a song. It was an EPIC night.

via Queens of Noise – Event – Library Foundation of Los Angeles.

For Your Christmas Consideration

What with early Hanukkah this year, the holiday season is already here! I’m sure you have someone on your list who would like a copy of a widely heralded book about a band of teenage girls in 1970s LA. As much as I like to see my Amazon rankings rise, I recommend you buy your gifts of Queens of Noise from an independent bestseller. Book Frog in Rancho Palos Verde has signed copies, and you can order them online. You should be able to get a signed copy from Books and Books in Miami and Book Soup in West Hollywood too. And of course, there’s the incredible Powell’s Books in Portland. Available for the Kindle too! Perfect for music lovers, teenage girls, Twi-fans, Miley fans, California history buffs, etc. I will even send you a personalized, signed sticker if you email me at evelyn@evelynmcdonnell.com

May this be the final word on this subject.

Queens in the Classroom

Classes have started at LMU, where I teach; hence my relative silence here at Populism. Balancing writing and teaching is never easy, and my blog always seems to suffer most. I’m hoping that will change, as this is the first year when I am not trying to write a book as well as teach a full load. Instead, I’m busy publicizing that book. Teaser: Some very special activities are being planned to celebrate the publication of Queens of Noise. Watch this space for more.

I try to keep my various duties as integrated as possible. To that effect, I’m teaching a new course called Revolution Girl Style: Punk Feminism Then and Now. It’s a seminar for first-semester students, part of this year’s new Core Curriculum. Nineteen wonderful young ladies are looking to me to train them in the ways of the university (thankfully, I have a writing instructor too — go Liz!), but more importantly, to inspire them with the music and mottos of Riot Grrrl.

On Day 1, I played videos of the Runaways performing “Cherry Bomb,” Bratmobile performing the same song, and Miley Cyrus’s VMA performance two days earlier. The latter is what we educators call “a teachable moment.” The students had a lot to say — it was one of the best discussions I’ve had in a classroom. And it was refreshing to see it all from their eyes — and depressing to realize that they weren’t even born when the original Girl Night occurred (depressing because in 1991, I was already older than they are).

Their first assignment is to read Queens. No, I’m not just trying to generate some easy sales. The idea of the First Year Seminars is for professors to teach to their research interests — and the Runaways is what I’ve spent the last four years researching. Their story encapsulates the perils and power of women rockers before Riot Grrrl. They were a direct influence on Revolution Girl Style — i.e., that Bratmobile cover. And for better or worse, Joan Jett et al have inspired Cyrus’s clumsy attempts to shed her virginal Disney image. Long before the VMAs blew up in her face, Miley was the exploding Cherry Bomb, performing a Runaways/Jett medley live. Yeah, she’s no Cherie Currie or Allison Wolfe, but she doesn’t lip-sync and she means it when she says she doesn’t care.

But Cyrus is a side note. After the Runaways, we’ll talk about the explosion, and then implosion, of Riot Grrrl, and its reemergence via Pussy Riot et al. Here’s the syllabus, subject to change. Sorry: the class is full. Revolution Girl Style syllabus

The Onion predicted Mileygate (thanks to Eric Stoner):