In honor of America’s first Man Booker Prize winner, I’m reposting my 1990 Village Voice feature on Paul Beatty, back when he was still a poet. 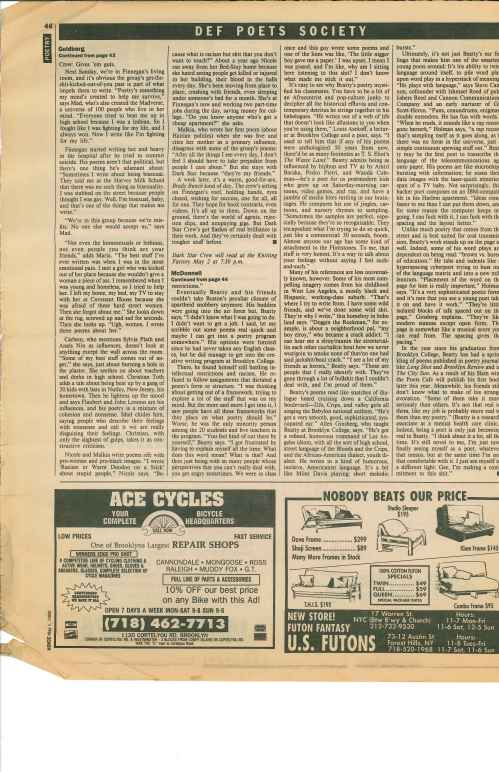 I think Galileo would appreciate tonight’s moonrise over Cabrillo Beach.

Big news for San Pedro: The next production of The Industry, the site-specific, tech-savvy, game-changing Los Angeles opera company, will take place at Cabrillo Beach in 2017. The Industry is pretty much the coolest theater company in Southern California, if not the world. Their production of Invisible Cities, based on the Italo Calvino novel, was staged at Union Station, with protagonists Marco Polo and Kublai Khan mingling with real travelers in real time. Last year, their “mobile opera” Hopscotch moved from various  spots in Downtown LA. Both drew tremendous acclaim and press attention.

The company debuted a gorgeous film of Invisible Cities at Pedro’s Warner Grand Theatre this evening. They opened the event by announcing Bertolt Brecht’s Galileo as their next production. The show will take place around a bonfire on Cabrillo — aka my front yard. (After the party, there will be the after-party.) Artistic Director Yuval Sharon said the Industry chose San Pedro because of our town’s (see what I did there? “Our Town?”) “long rich history of labor equality, their union history, and their connection to the port.” Galileo depicts the battle between reason and authority — a timely issue, as Sharon noted. The Industry will be working in collaboration with Tim Robbins’ politically conscious The Actors’ Gang (whom I saw stage a production of Our Town, coincidentally, several years ago), with art by locally based sculptor Liz Glynn. Even more encouragingly, Sharon said the company is eager to work with homegrown businesses and talent. Representatives of locals-only arts organizations San Pedro Ballet and Grand Vision were in the house.

As a denizen of the beach, I’m not so crazy about Sharon’s request for a helicopter; we get enough of those around here, thank you very much. But otherwise, as we say around these parts, STOKED.) Galileo will take place September 16, 17, 23, and 24.

Ironically, right before the announcement and screening, the San Pedro International Film Festival wrapped with a panel discussion about establishing a creative corridor in town. The conversation was interesting but lacking in context and depth, conflating technology with arts and never addressing how gentrification is another word for displacement. The whole conversation was largely rendered moot with the Industry’s announcement next door, though the panelists seemed oblivious of the pending tremblor. In the words of Angela Romero, “that’s so Pedro.”

I’m honored to have again served as a judge for the Dayton Literary Peace Prize, an award that honors not just good writing but writing for a good cause. Ruben Martinez and I were handed six strong finalists, but ultimately, Susan Southard’s powerful Nagasaki blew us away with its meticulous reporting and devastating narrative. It’s a powerful book that is timely not just because the 50-year anniversary of the dropping of the atomic bombs just passed, but because it provides compelling evidence of how horrible humankind can be to itself — and why we can’t let power get into the wrong hands.

I was also happy to see my former Village Voice colleague James Hannaham was the runner-up for the fiction award. (I only judged the non-fiction category.)

Below is the press release for the winners and finalists. END_OF_DOCUMENT_TOKEN_TO_BE_REPLACED

Fast cars. Rock stars. Street art. The San Pedro International Film Festival rolls into my hood this weekend with an especially cool lineup. The festivities start tonight with the usual monthly highlight of the Peedrow social calendar: Art Walk. October’s iteration features the opening of a SPIFF-sponsored pop-up gallery featuring works by artists in the documentary Dark Progressivism, about LA’s graffiti and mural arts history (which screens October 15). There’s also an exhibit about the Brotherhood Raceway, the defunct street-racing venue on Terminal Island, culled from the photo archive of Eddie Meeks and curated by my good friends Laurie Steelink (Cornelius Project/Track 16) and Tim Maxeiner. The gallery will be open during box-office hours throughout the festival, at the SPIFF Lounge at 446 W. 6th Street.

Wayne Kramer licks out the jams on Friday.

On Friday guitar legend Wayne Kramer (MC5) and his wife Margaret Saadi will talk about their work bringing music to prisons with their organization Jail Guitar Doors (named after the Clash song which includes Kramer as a subject), as well as play some music. Some of the greats of Latin jazz, including Michel Camilo and Chucho Valdes, are showcased in the documentary Playing Lecuona, about the influence of the Cuban pianist Ernesto Lecuona, screening Oct. 15. Other festival highlights include Lunafest, the collection of short films by women that usually contains some gems, and some virtual reality fun. This is the most diverse and probably the hippest SPIFF ever. Full schedule at www.spiff.org.

Tribe 8 was one of my favorite bands of the 1990s. I followed them to the end of the earth — well, to the Michigan Womyn’s Music Festival. They changed the world that year, smashing generation gaps and sending the ladies of the land into the moshpit. They never got their due and still don’t; in Pitchfork’s recent list of punk feminist anthems, their seminal voice is woefully MIA — still too rad for that site’s chamber-music cultural feminism aesthetic. So I was thrilled to catch up recently with guitarist Flipper, now going by the name Silas Howard and an accomplished director of film and television. Here‘s how I wrote it up for the LA Weekly.