WWR on Muses and Stuff Podcast

Congrats to Chantel Leah and Lynx O’Leary, the wonderfully named hosts of the Muses and Stuff Podcast, for their 100th episode, which focuses on Women Who Rock! There was a glitch with the podcast but you can listen to the correct version on their website: https://bit.ly/2ItE3Zx

Tagged as interview, muses and stuff, podcast, Women Who Rock

In either late 1994 or early 1995, I interviewed Cranberries singer Dolores O’Riordan for Interview magazine, over the phone. The article ran in the March 1995 issue, as an edited Q&A. When she passed away Monday, I dug up the old transcript; following is the unedited interview. She had just gotten married and the band had released their second album. It’s poignant, and powerful, to read now.

EM: You’ve had more success in the U.S. than in England, haven’t you?

DO: It was hard to take off here because of bad marketing, I think. The two singles were released on a demo a year before they came out as singles, so most of the press had already heard them. They’d hyped up the band a year prior to the release of the debut. So when the debut came out it wasn’t anything new to the English public. They started going against them, backlashing, saying the demo was better and whatnot.

EM: How is the English press treating you this time?

DO: I don’t really read them anymore. The band’s happening around the world, everywhere except Japan. So at this time in my life my perspective is more global, so I’m not really worried what an English paper says, or what an Irish paper says.

EM: Are you at all reluctant to do interviews?

DO: No, but I suppose I’m getting a bit cagier.

EM: Where are you living now?

DO: In the south of Ireland. I’m building a house there overlooking the sea. It’s really quiet and peaceful. We haven’t actually started building, we just got planning permission.

EM: Are you building a dream house?

DO: Yeah, it’s a nice big house. I’ve never really been that type of dream-house person, ‘cause I never grew up with too much materialism around me, so it wasn’t as if I longed for it. The idea of having a gymnasium in your house, or a bar, would just not be in my mentality, because you don’t see it that much. But as you travel and stuff, you realize you can’t go out to public places that much, so you put it all in your house — your own little gym and your bar, everything you need in there. You can go there for peace and tranquility, when you need to get away from everything. END_OF_DOCUMENT_TOKEN_TO_BE_REPLACED

Dolores O’Riordan had one of the most distinctive voices in rock’n’roll: an angelic brogue, like a rose and briar entwined. “I grew up with a very strong Irish accent, and I didn’t see why I should put on airs and graces for anything or anybody,” she told me when I interviewed her for Interview magazine more than two decades ago. You can see that article below; I’m working on getting the whole transcript typed up (feel free to contact me if you’re a Cranberries fan and would like to help out). You can also hear a snippet of what I told NPR’s Andrew Limbong about her.

Bjork on Digital and Beyonce 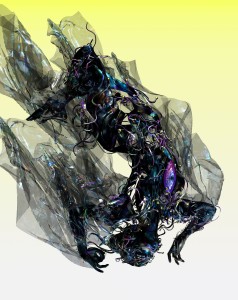 I can never get enough Bjork. I interviewed her recently for LA Weekly and could have talked for hours. I’ve interviewed her several times, including once in Iceland for a cover of Request magazine, and I always admire her intellectual curiosity and open heart. Plus, we both love Beyonce. I’m looking forward to checking out her Digital exhibition that opens at the Magic Box this weekend, and seeing her at the Disney Concert Hall May 30. Enjoy the story!

In light of the recent resuscitation via Twitter of Solange Knowles’s feud with Jon Caramanica, and just to point out that white male critics did not invent coverage of R&B, here, in honor of Throwback Thursday, is my interview with her in Interview magazine, circa 2003. Now if only I could find my even earlier Interview interview with her big sis Beyonce, back when she was in Destiny’s Child.

It was an honor and pleasure to catch up recently with Richard Goldstein, whose Pop Eye column for The Village Voice in the 1960s helped invent the field of rock criticism, and who was Arts Editor at the Voice when I worked there in the 1980s and ’90s. We talked about music, politics, writing, Paris, the Voice, feminism, and more in this interview for the Los Angeles Review of Books.

Queens of Noise on WJBC

You can download or stream WJBC’s interview with me about the Runaways at THE VOICE OF CENTRAL ILLINOIS – Play Now.