The Punk Feminism show at Stanford May 12 with Alice Bag, Allison Wolfe, and myself was nicely documented in a podcast feature by Liam Kane-Grande for the Peninsula Press. He makes great use of music by the Bags, Bratmobile, and Sex Stains — unreleased tracks! Hear them here first! They sound great.

All Together Now: Oh Bondage Up Yours! 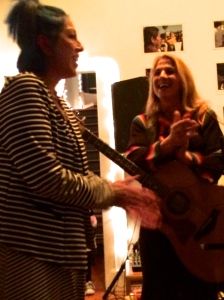 It was literally my punk rock dream come true. There I was, on stage with some of my ultimate musical heroines, singing “Oh Bondage Up Yours!” The F Word show at Studio Grand in Oakland May 13 wasn’t just a historic first — Cali punk legends Alice Bag and Frightwig on a bill together. It was a feminist singalong and call to action. These are women, and one man (veteran keyboardist Eric Drew Feldman), who take seriously the participatory mission of DIY culture and embraced the intimate setting of a community space with photographs of social justice organizations on the wall. Though the Wig and Bag met in person for the first time that day, they quickly got into each other’s grooves and unleashed some fearsome woman power.

I did my best to warm the crowd up with a little discourse on the collusion of punk and feminism. (I’ll post my pieces later.) Having made the online introductions of the bands, I played MC and DJ (and a little Hype Woman too). After a critical karaoke of Patti Smith’s “Till Victory” (I’ll post that as well), I intro’d Bag — aka Alicia Velasquez — and her bassist, awesome Angie Skull. Alice interspersed excerpts from her memoir Violence Girl and her new book, Pipebomb for the Soul, about her days in Nicaragua with the Sandinistas, with songs. Frightwig’s Deanna Mitchell, Cecilia Kuhn, Mia d’Bruzzi, Eric Drew Feldman and I joined in as backing singers for “Women on Top” and “Modern Day Virgin Sacrifice.”

Then, it was Frightwig‘s turn. But first, more Bag Wig McDonnell: I recited Poly-Styrene’s famous intro to “Oh Bondage Up Yours,” and then there we all were, an unplugged rendering of the classic punk feminist anthem. I even sang the second verse, Nike help me. (The goddess, not the shoemaker.) Angie, Alice and I also aided and abetted the newish Frightwig song “War on Women.”

The ‘Wig closed the evening with new songs as well as some of their classics from the 1980s, including “My Crotch Does Not Say Go.” Drummer Kuhn ended with the intense “Lament,” one of many songs that evening that probed uneven social systems and questions of identity.

We practiced our jams for the first time just an hour before the show started. It was also a rare acoustic show for Frightwig. So the night had a very raw, collaborative quality to it. Watching these women learn each other’s songs and find instant notes of harmony and grace — and of collision and dissent — was a tremendous, inspiring experience. I had gotten a taste of it the day before, at Stanford, when I watched Angie and Alice join Allison Wolfe (Sex Stains, Bratmobile, etc.) for another herstoric jam, this one a rendering of the Bratmobile ode to  a girl named “Panik.” I know punk isn’t about technical virtuosity, but I just have to say it: All these women can really sing. Without the distortion, you could hear that.

I’m so grateful that I got to be not just a witness, but a participant, in these moments.

Thanks to Vanessa at Studio Grand and to Ruben Martinez, Jeff Chang, and Ellen Oh at the Stanford Institute for Diversity in the Arts for making these moments happen. 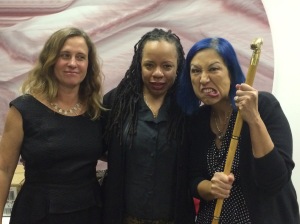 Following is an approximation of the remarks I made to launch the panel. END_OF_DOCUMENT_TOKEN_TO_BE_REPLACED

Allison and Alice Bury You 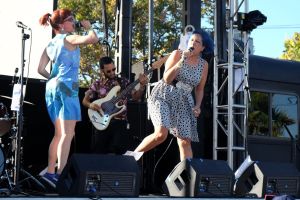 There’s nothing like seeing two of your heroes on stage together to get you back into city living. On Saturday, August 16, original LA punk Alice Bag joined original grrrl Allison Wolfe and her band Sex Stains for a tear through the Bags song “We Will Bury You” at the Echo Park Rising festival. After watching a number of sui generis alt-rock bands plod through their Arcade Fire and Pixies routines, it was so refreshing to see two front women whose kinetic energy lifted them off the stage. Note that only one foot out of four is on the ground in this great photograph by Tim Maxeiner.

It’s been way too many years since I’d seen Allison perform in a band, though she has spoken to my students at LMU a few times — she’s an inspiration to a new generation of fearless musicians. Wearing a paper shark dress that I think she told me Kathleen Hanna gave her, the erstwhile Bratmobiler still pogos with that manic cheerleader energy, ponytail flying. She has a fascinating foil in androgynous co-singer Mecca Vazie Andrews. Sex Stains reminded me a lot of the Slits, and made me miss dear Ari all over again.

It was a great way to get back in my groove, after two months of being off the grid in the Upper Peninsula of Michigan. Sorry for my radio silence. Stay tuned.

My She Rocks Playlist

There’s nothing like playing a batch of your favorite records to set your head right. Thanks McAllister and Cass Monster for allowing me to take over She Rocks KXLU last night. Here’s what I played:

I Rock She Rocks!

She Rocks host Melissa McAllister interviewing me at the William Hannon Library.

Tomorrow night, May 7, from 7 to 8 p.m., I’ll be a guest on my favorite of the many amazing KXLU shows: She Rocks! I can’t wait. Going to spin lots of my cool favorite ladies, like maybe some Jayne Cortez, Suture, Tribe 8, Gutbank, Bratmobile, Maureen Tucker, and of course, the Runaways. Taking requests here and now! Tune in to 88.9 FM or stream it live.

If you weren’t one of the lucky people who squeezed into the Los Angeles Central Library January 9 for Queens of Noise: Music, Feminism and Punk: Then and Now, you can now see for yourself just how funny and passionate my copanelists Exene Cervenka and Allison Wolfe were. The Aloud series has posted the video on Vimeo. We discuss Pussy Riot, Rock Camp for Girls, Riot Grrrl, Beyonce, the Runaways, and a lot more. If you want a piece of feminist punk history, Exene is selling off many of her earthly possessions at a sale that starts today.

Queens of Noise: Music, Feminism and Punk: Then and Now from ALOUDla on Vimeo.