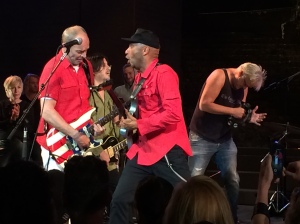 The second annual benefits concert for Jail Guitar Doors promised guest artists, and last night at the scenic John Anson Ford Theatre, Rock Out 2! delivered. From Ben Harper playing slide with mom Ellen at his side, to Jackson Browne and Tim Robbins bashing out Bobby Fuller’s “I Fought the Law” (smart thematic choice for the evening), to show organizer Wayne Kramer and Tom Morello kicking out the jams, it was an evening of surprising and surprisingly tasty collaborations.

The concert took a while to find its groove. But when Jill Sobule sang her funny sweet song “Jetpack,” well, the music got air. The plucky songster also traded electric barbs in an ax faceoff with Kramer, the former MC5 guitarist and JGD main man. The Harpers plucked and twanged a protest lament about Monsanto. I have to admit I’ve been lukewarm on the son in the past but am now smitten by this charming man. Ditto Jackson Browne: The Big Rock Star of the evening was humble and musicianly, duetting beautifully with Harper. “Running on Empty” was maybe unnecessary — isn’t he sick of playing it? — but still, I now want to see him again at Way Over Yonder. 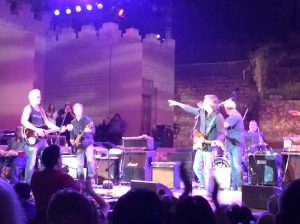 Tim Robbins and Jackson Browne at Rock Out! Photo by Evelyn McDonnell

Former Rage Against the Machine guitar god Morello finished the evening with a blistering set with his band the Freedom Fighters Orchestra. He unveiled a timely new song, “Marching on Ferguson,” and did his usual de/reconstruction of “The Ghost of Tom Joad.” I can never see him play that enough times, with or without Bruce. (Natch, I’d prefer with.)

Then it was time for the obligatory all-star finale. Harper failed to answer Morello’s calls for a historic jam — wisely, since instead of playing “Bulls on Parade” WHICH WOULD HAVE BEEN THE PERFECT SONG FOR A NIGHT ABOUT JUSTICE IN THE AGE OF FERGUSON (sorry, got overheated there), they played — OMG — Kiss’s “Rock and Roll All Nite.” Sigh. Maybe rock really is dead.

Fortunately the eclectic ensemble closed with the MC5 classic “Kick Out the Jams.” Typical LA overload: There were so many talents on stage — including pioneering punk siren Adele Bertei, and singers Harper Simon and Cody Marks — that some of them didn’t even get their moment to shine.

I went into Twin Towers Correctional Facility with Jail Guitar Doors in May. They played a great show and Wayne gave a rousing speech before a couple hundred inmates. The nonprofit, founded by Billy Bragg in England, goes into prisons, giving residents guitars and teaching them in songwriting workshops. So not only was it a night of generous, rousing music in a gorgeous venue under a clear sky, it was all for a good cause.

Masha Alekhina and Nadya Tolokonnonikova from Pussy Riot and Zona Prava will come to LA for the first time.

Masha Alekhina and Nadya Tolokonnikova are Russian conceptual artists and political activists. They are founding members of the art collective Pussy Riot. In August 2012 they were sentenced to two years of imprisonment following an anti-Putin performance in Moscow’s Cathedral of Christ the Saviour. In March 2014, Alekhina and Nadya Tolokonnikova announced the opening of the Mordovia office of Zona Prava, their newly created prisoners’ rights NGO. Both are Lennon Ono Grant for Peace recipients.

Nadya and Masha will attend a screening of the movie Pussy vs. Putin. The event is organized by Cinema for Peace and the entry is free, please see the registration email address below.
Q&A with Pussy Riot / register for free guest@cinemaforpeace.com

I’m dying to see Alien She, the exhibit about Riot Grrrl art currently at Carnegie Mellon.

Filed under Populism, Queens of Noise

Regina Spektor vocalizes heartache, and not just of the girl-loses-boy kind. Last night, at the taping of a session for KCRW’s Morning Becomes Eclectic show, the postmodern Edith Piaf sang about death, loss, the streets of New York, museum paintings, and Paris in the rain in her inimitable throb, before a select crowd of 200, including Spiderman (Andrew Garfield). After the nine-song set, she discussed with KCRW music director Anne Litt the deep roots of her bittersweet songs. Twenty-three years ago Spektor emigrated to New York from the Soviet Union with her family.

“You’re a rarity,” she said of her constant awareness of her Russian Jewish roots. “You get to live. You never know when they’re going to pogrom you.”

Spektor seemed safe but hot and nervous in the packed swelter of Apogee’s Berkeley Street studio in Santa Monica. “This is a new genre; it’s intimate with strangers,” she joked. She sipped water obsessively in between gorgeous takes of songs including “Firewood” and “Ode to Divorce.” The session, which will air Sept. 25, took place on the eve of KCRW’s summer pledge drive.

The singer/songwriter talked about her decades of classical piano lessons with a fellow East European immigrant her father befriended on the subway. She demonstrated the considerable depth of her talent, the kind of longterm legs we associate with jazz singers, not indie-rock songstresses. Spektor sings with the clear tone and sure rhythmic footing of an Ella Fitzgerald, and vulnerability of Billie Holiday. She flirts with beat-boxing and could probably do a mean scat. And she has a talent for pregnant analogies: “You’re like a big parade through town/ You leave a mess but you’re so fun,” she sang in “The Party.” It took her two takes to get that song right, but right she got it.

dream hampton crafted a lovely piece for NPR about Detroit, focusing around one of my favorite White Stripes songs.

via My American Dream Sounds Like The White Stripes : The Record : NPR.

We spent much of our spring break desert trip listening to Suzi Quatro, particularly her great song “48  Crash.” Sad and ironic to find out that she recently had a crash of her own. I’m in the midst of reading her memoirs,  reappreciating the ground she broke. I don’t think there would be a Runaways without the Glycerine Queen — certainly, Joan was never the same after hearing Suzi Q.

Filed under Populism, Queens of Noise