The Incline of Western Civilization

Los Angeles punk has always had its own distinct aesthetic, inspired by New York and London but shaped by its environment: the West, Hollywood, the ‘burbs.  Somehow, LA punks seem to be aging more relevantly than their peers. This weekend I saw three artists from the earliest, old school days of Los Angeles calling: Alice Bag (the Bags), Phranc (Nervous Gender), and John Doe (X). Punk’s disruption of traditional beauty standards and of heteronormativity always seemed particularly radical in the shadow of Tinseltown, but these AARP-age idols show that choosing original style over the surgeon’s knife is the best revenge. Their music has also matured not declined. Chops may not be punk’s raison d’etre, but these three have them: Doe has always been the genre’s most golden-voiced crooner, but Bag and Phranc are also skilled singers. They flubbed some lines but their harmonies were pitch perfect as they played their second gig as the act with the best “shipped” name ever …. wait for it … PHAG! 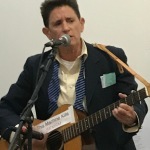 Phranc (I love the guitar sticker!)

If you don’t know what a shipped name is, then clearly you don’t have a teenager:  Short for relationship, it means the single name that results from the union of two, such as Brangelina, Kimye, and now, Phag. Phranc and Alice have known each other since at least the early ’80s, when they both were in Castration Squad. As that act’s name indicates, they were (and are) gender warriors. They found refuge in punk’s embrace of outsiders, as they discussed on a panel at the Grrrls on Film festival at Loyola Marymount University in 2016. But Phranc in particular also found racism and homophobia, and eventually she rejected the scene and rebranded herself as the “All-American Jewish Lesbian Folksinger,” revealing the warm, womanly tones underneath punk’s noise and her flat-top ‘do. She’s still a little bit folky, while Bag’s a little bit rock’n’roll, as they sang Friday night at the Razorcake 100th issue party at Avenue 50 Studio. They were parodying Donny and Marie, but the original goal of their union, they said, was to be the Smothers Brothers. And sure enough, their act is satiric, slapstick, and also pointedly sincere. They sang songs dissing Mike Pence and praising Malala. They passed around their prototype for a new $20 bill, featuring Harriet Tubman instead of Indian killer Andrew Jackson. They were funny and sweet and sloppy and pissed. I told my compatriots Allison Wolfe and Sharon Mooney that we had to start their fan club now, and I have the perfect name for it: The Phag Hags! END_OF_DOCUMENT_TOKEN_TO_BE_REPLACED

Filed under Grrrls on Film, Queens of Noise, Uncategorized

Because of the Hurricane

I wrote the poem below almost 28 years ago, after I visited Puerto Rico for the first time. A few months earlier Hurricane Hugo had devastated much of the island. My companion, the Nuyorican critic and poet Ed Morales, and I were struck by the continuing damage, physical and psychological. In the decades since, I have survived a few hurricanes myself, most notably during the terrible season of 2015, when I lived in a home below sea level on Normandy Isle in Miami Beach and a series of vicious storms pummeled us.

Hurricanes are obliteration machines. They set the clock back to zero. You can have all the community support you want: After Wilma delivered the knockout blow in October 2015, our neighborhood truly pulled together. With no electricity, hence no stoves or refrigerators, we took turns hosting barbecues, using up our perishables. With no screens to distract them, the kids played imaginative games together, most memorably one called “hurricane,” which involved shining flashlights on tree branches pulled to wave wildly to the accompaniment of lots of screaming. When, thanks to the seeming caprices of what is optimistically called “the grid,” our side of the street got power back a week before the other side, we strung extension cords across Biarritz Drive, yellow tentacles striping the blacktop. It was a simple, sweet time in a way. But with basic modern services disrupted, Wilma made us all primitives — dependent, ultimately, on the kindness and, hopefully, efficiency of strangers.

My heart goes out to the people of Puerto Rico, and the Virgin Islands, and Cuba, and all the Leeward Islands, and Houston, and Corpus Christi, and my dear Keys and Miami, and to Mexico too. Nature can be a bitch. But it’s certain humans who can be truly evil.

Because of the hurricane
The man sells bowls
with Taino cave drawings
out of his home
in a San Juan suburb
We get lost on streets
named Florence, Venice, Madrid
looking for Barcelona
Geegaws gather dust
on shelves in the dining room
They are little more than fanciful souvenirs
yet his wife shows them off proudly
hoping we mainlanders
will purchase something big
the table carved out of a tree stump, perhaps,
instead of the keychains and ashtrays
our artists’ budgets humbly choose
Because of the hurricane
we back down a dirt road in our rented car,
chasing roosters,
my lover’s aunt explaining
in a rapid clucking Spanish
that I don’t understand:
The Loiza workshop
where men of African descent
make brilliant masks
of coconut shells and papier-mache
is closed
Instead we pull up to a brightly painted casita
where a Loisa woman
sells straw dolls and coconut oil —
she tells my lover
it will keep his hair from falling out
He doesn’t take offense
Because of the hurricane
You can see the ocean
from the house
where my lover’s parents
will retire next year
leaving the Bronx
the mainland
the part of the U.S.
where Puerto Ricans
can vote for American presidents
yet are still treated like second-class citizens
Luquillo Beach twinkles in the horizon
from El Yunque.
Up close,
for every palm spreading its fronds
in a heavenward mane
there is the stump of a tree felled by the hurricane
Because of the hurricane
My lover and I
can’t touch each other
without rousing pain
Can’t make love without drowning in sorrow
hugging in the night
to the sharp cries of the coqui
and muffled tears
Because of the hurricane
in San Juan’s hotel district
the woman at the tourist office
hurries to lock the door
shutting us in
as a man outside
with institutionally cropped hair
slices his throat
on the jagged edge
of a broken beer bottle.
(I know what he is doing
I know the feeling of broken glass
drawn against flesh)
He is lying on the pavement
his white T-shirt
and blue jeans
maroon with blood
We have only been
in Puerto Rico two hours
we have never seen
anything like this
As the police car speeds past
two men hover over the body
in the back seat
We wonder if it is too late