Kim and the Created

A tall woman in a black leather bodysuit flails on the sidewalk in the center of Loyola Marymount University. Kim House wails into a mike. About 50 students form a circle around her, spectating and protecting as the lunachick enacts a fit. Her guitarist and drummer lay down a heavy thrash sound that bounces off the brick and stucco buildings. Kim and the Created are the final act of the first-ever Grrrls on Film festival, and they embody just about everything that has been depicted and discussed over the last three days of screenings and panels: noise, representation, damage, diversity, power, support, expression, transgression, disruption, eruption, punk, feminism. Several of my students are there, and I recognize the light in their eyes: the spark of transformation, the recognition of great talent and also the reflection of themselves in this soul who expunges pain then leaps back on stage, ready to sling a bass over her neck and bang out deep, propulsive vibrations.

In terms of attendance, attention, and smooth operation, Grrrls on Film, held March 18-20, exceeded my expectations. People came from all over LA – a rarity for this Westside campus – and mingled with students and faculty, filling or nearly filling the Mayer Theatre. Thoughtful articles in the LA Weekly, i-D, The Argonaut, Grimy Goods, The Loyolan, Bust, and Los Angeles Magazine, and interviews on KPCC, KPFK, and KXLU, helped spread our message and the works of our featured filmmakers, speakers, and performers. All scheduled guests showed up in a timely manner, and we stayed within our budget. As first-time producers, my colleague/coconspirator Sharon A. Mooney and I breathed several sighs of relief.

Evelyn McDonnell and Sharon A. Mooney

But more importantly, I feel like we succeeded on a profound level, in terms of stimulating important discussions about gender, art, and activism; connecting creators to each other; and impacting the lives of young women at a particularly crucial crossroads in their life. Riot Grrrls reunited. Filmmakers from opposite coasts exchanged notes and numbers. Punks addressed difficult parts of their history that had been suppressed for decades: the misogyny, homophobia, and racism that lashed back against their outsider disruptions. Students tweeted their discoveries and discernments. Tweens made videos, and faculty stepped out of their silos to think deep about what it means to be an oppressed group speaking truth to power.

Emotions ran high. The four female filmmakers at the kickassoff Girl Power panel Friday night – Karyn Kusama, Angela Boatwright, Janice Rhoshalle Littlejohn, and Leena Pandharkar – spoke frankly about the inequities women face in the industry. “The indie world is an economic ghetto,” stated Kusama, maker of Girlfight, Jennifer’s Body and the new The Invitation. “Rather than creating separate programs for women and minorities, why don’t we just hire them,” asked LMU alum Littlejohn.

The festival’s first screening paired two films about coming of age in Los Angeles: Michael Lucid’s 1996 documentary Dirty Girls and Floria Sigismondi’s 2010 feature film The Runaways. Afterwards both filmmakers and two of the subjects of Lucid’s movie, Amber and Harper, answered audience questions. It was an auspicious start: Film students rubbed elbows with veteran directors, as talk of mentoring and hustling filled the air. “We need all your parts, all the oddities,” said Dirty Girl Harper. “Your uniqueness exists only in you, and without it, the world is missing it.”

Floria Sigismondi and Amber and Hannah of Dirty Girls. Photo by Emma Spiekerman

Saturday offered a movie marathon. It started with the future, via the past: the cyberpunk animation of Golden Chain, followed by lost/reclaimed classic Born in Flames. Filmed in 1983, Born in Flames is a startlingly prescient dystopic film whose imagined prospects offer eerie parallels to today — intimations of Sandra Bland, Occupy Wall Street, and 9/11. Director Lizzie Borden depicts the US 10 years after a peaceful socialist revolution, which (surprise surprise) has done little to improve the lives of women. Feel the Bern? “Myself, I think it would be great to have a woman in the White House,” the filmmaker said in the Q&A afterwards.

All makers of the shorts and features shown at GOF answered questions after the screenings of their movies, including Penelope Spheeris and her daughter, Anna Fox. The screening of Spheeris’s groundbreaking 1981 LA punk documentary The Decline of Western Civilization was one of the festival’s most anticipated events, and most controversial. For many people – including myself – when it debuted, Decline immersed us in a punk subculture that provoked and inspired. It has rarely been seen in the decades since, until its release, finally, on DVD and Blu-Ray this past summer. For many people – again, including myself – it has shocked us all over again; the hatred of others that is spewed on screen by white men like Lee Ving of Fear” has not aged well.

The seminal punk musician Phranc saw herself in The Decline of Western Civilization for the first time since it had been shot at the Grrrls on Film screening. Sitting next to her daughter, she was deeply disturbed by the film’s depiction of misogyny, homophobia, and racism. She came back that evening to articulate what her frustrations, hopes, and desires had been as a Jewish lesbian navigating through the nascent punk scene. Phranc was on the LAy of the LAnd: We Will Bury You panel with three other powerful figures of the LA underground: Alice Bag and Nicole Panter (both of whom are also in Decline), and Raquel Guttierez. Their discussion was blunt and historic; “without question the best panel discussion on punk rock I’ve ever had the pleasure to see,” posted punk musician and historian David O. Jones on Facebook afterwards.

Phranc talk: “Any time a woman takes the stage, it tamps down misogyny.”

“You were the thing before you did it,” said Panter, writer and former Germs manager, summing up punk, and the festival’s, DIY spirit. “You didn’t wait for anyone’s stamp of approval.” 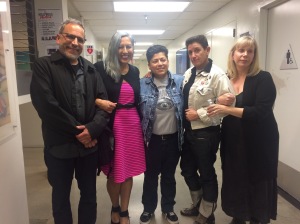 Between Decline and We Will Bury You, two vintage, black-and-white shorts by Lucretia Tye Jasmine probed experiences of sexual assault, police violence, slut-shaming, body image, and bulimia – before they were today’s hot-button topics. When such prominent actors as Lex Vaughn, Nao Bustamante, and Jennifer Locke hammed up the unfinished script of Jill Reiter’s In Search of Margo-go, indulging in silly costumes and ‘80s nostalgia, it provided a welcome, hilarious release from a weekend of tough confessions and hard exegeses.

The last films of the festival aired Sunday at noon. Vega Darling’s Lost Grrrls and Abby Moser’s Grrrl Love and Revolution: Riot Grrrl NYC both documented the Riot Grrrl movement that helped swing punk back from an environment of violent exclusion to one of empowered inclusion. The spirit that had been celebrated in movies all weekend came alive at the Grrrls on Stage festival afterward, featuring spoken word by Kari Krome and Sarah Maclay, music by Peach Kelli Pop, Colleen Green, and Kim and the Created, KXLU DJS, host Allison Wolfe, and lots of cool booths. LMU professor Alicia Partnoy spoke and sang, in English and Spanish, about her experience being imprisoned by the Argentine dictatorship in the 1970s, only able to touch her daughter through glass for three years. All-girl roller derby teams skated around Alumni Mall. Kids made fanzines at a table staffed by the William H. Hannon Library. At a table housing three different rock camps for girls, anyone could make their own short music video, with costumes and confetti. The bands crushed it. 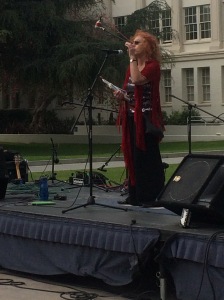 I figured that the only thing I was going to feel all weekend was stress and then, hopefully, relief. Instead I too was moved, as I realized I was accomplishing my own mission as a teacher. Thirty years ago I was that young woman writhing in the center of a college campus, only I wasn’t performing. My undergraduate years were one of the most difficult periods of my life, as I struggled to find myself far from a home that was disintegrating, in a class milieu in which I did not fit, stumbling through relationships that made me how little feminism had accomplished in terms of the dynamics of love. At a time that I had been told/sold would be one of the best of my life, when I was supposed to be coming into my own as an adult, I was lost. Every weekend I fled the confines of my Ivy League school and found myself in the local clubs, where bands played loud music and sometimes, sometimes, there were women on stage.

Grrrls on Film was not for everyone — although we were funded and organized by a collaboration between multiple colleges and schools; my colleague Ruben Martinez, moderating the We Will Bury You panel, pointed out that interdisciplinarity is a eight-syllable word. Grrrls on Film was for the student with a disability who was in my office in tears two weeks ago, wrestling with her identity and sexual orientation. It was for the other young woman the following week, who bravely spoke in class about her experience having been sexually assaulted. It was for me, three decades ago, stumbling stoned through my campus, bandanas tied around my wrists to hide fresh scars, looking for connection. “Today I was proud to be a Lion and a woman,” Tweeted one student. In a paper for a film-studies class, another Lion wrote:

“Between both the panel and the screening, I found myself re-thinking about my choice in career path, but not in a bad way. When I told my family and friends that I was going to go into film and attend film school at LMU, some of them thought I was insane. “The industry is dog-eat-dog”, “There’s not a lot of girls on set”, “You want to write?” were a lot of the responses I got. But after listening to these women on the panel speak, hearing what they had to say, if anything, made my passion and fire for working in this industry burn brighter. I want to be able to do my damn best work and put myself out there and TRY in the world of film and TV. I want to prove everyone wrong. I want to be like the women on the panel who campaigned and raised money for their films, who took on a mostly female crew, who fought tooth and nail to get their projects made and who have a career in something they are passionate about and love doing. They have inspired me to work harder and to accomplish my lifelong goals of being in the industry as a writer and an actor. They had discussed how most of them are getting into producing now so that they can have more control over their projects. Producing was something I had never once thought of doing, but after listening to them talk about it and their reasoning behind why they are doing it, I have become incredibly willing to learn more about producing and to have more control over the stories I write and the projects I make. The Grrls On Film events I attended both humbled me and pushed me as a female in film. “

I suppose the greatest compliment a new undertaking can receive is the question, are you going to do this every year? Even before the weekend started, Sharon and I kept hearing that. And no, we will not produce a three-day festival again next year – sorry, we have lives to lead, our own art to make. But we’ll do something, I think. What’s important is not necessarily what we do, but what all those people who came to Grrrls on Film do next. This, I hope, was just the beginning.

Filed under Grrrls on Film, Queens of Noise, Uncategorized