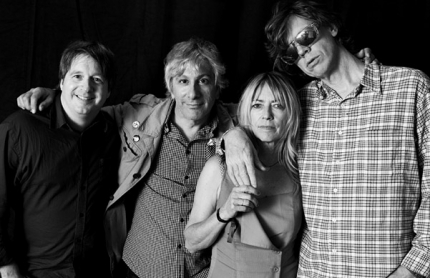 Kim Gordon and Thurston Moore have been on my mind, ever since I read Vanity Fair‘s latest trainwreck rerun story about Courtney Love yesterday. I’ll never forget running into Mr. and Mrs. Sonic Youth on Prince Street on the day news of Kurt Cobain’s death hit. “I’m so sorry,” I mumbled, as we stopped on a corner, because I knew they were friends.

“We’re not surprised by his death,” Kim said. We’d all been expecting Kurt to die any day, so wasted was his living. “It was just the way he died, the violence.”

I nodded. I didn’t really know what to say about such an ugly, intimate, yet public loss. It was a raw, vulnerable day for a rock critic to catch indie rock’s ultimate power couple, the coolest people on the planet. Other people would have hugged, cried. But we nodded, shared a moment of silence, then went on our ways.