Lautner in the News 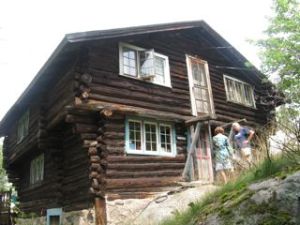 At Midgaard, John Lautner’s childhood cabin, with Karol Peterson in 2010

John Lautner has been in the news lately. First, one of his most famous houses, the Elrod in Palm Springs, is up for sale. Yesterday, Jim Goldstein announced he was donating his home, aka the Sheats-Goldstein House, to the Los Angeles County Museum of Art, meaning, hopefully, one of the architect’s buildings will finally be open to the public. This is significant, as one of the reasons Lautner has not always gotten his due for being the key transitional figure between the two Franks (Lloyd Wright and Gehry) is that his buildings are almost all private homes.

Perhaps just as significantly, eight of those houses — the John & Mary Lautner House, the Foster Carling House, the Schaffer House, the Harvey House, the Harpel (Hollywood) House, the Pearlman Mountain Cabin, the Elrod House, and the Walstrom House — have been submitted to the State Historic Resources Commission, in the hopes that they will be eventually nominated to the National Register. The multi-property application, prepared by students and faculty at Cal Poly, opens the way for preservation of additional Lautner properties. 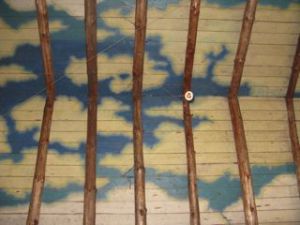 The ceiling of Midgaard, painted by his mother, the artist Vida Lautner

On a much sadder note, I only recently discovered that Lautner’s oldest child, Karol Peterson, passed away last year. I met Karol several years ago when I visited her father’s family homes in Marquette, Michigan. We kayaked together on Lake Superior, and I instantly loved this tall, outspoken, warm-hearted woman. It was she who suggested that someone should write a biography of her father, a task I have been picking away at during the last couple of years. Last summer I spent an intensive week with Karol going through her father’s and family papers at Deertrack (John’s first commission) in Marquette. Karol was in and out of the hospital then, and I knew she was not doing well, but I guess I was in denial when she stopped returning my messages several months ago. She was a great steward of her father’s legacy and memory, and I will miss kayaking with her dearly.

I lost my dreams.

Dreams — daydreams and night dreams — used to guide me. In the morning when I woke, I would make sure to remember what had happened to me during the night, and that memory would cling to me throughout the day, like a tissuey emotional shroud. I loved my dreams; recurring ones were old friends. They helped me see life in new ways. They taught me.

I thought about my old friends when I toured “In Wonderland: The Surrealist Adventures of Women Artists in Mexico and the United States.” This exhibit at the Los Angeles County Museum of Art is one of the most powerful and affecting gatherings of artwork I’ve seen in years. Re-seeing imaginative and confessional works by Frida Kahlo reminded me of her deep gift and profound statements. Looking from her paintings across the room to Alice Rahon’s Ballad for Frida Kahlo, I was also reminded of the powerful connections between women — how we can be each other’s muses.

Rahon was one of a dozen painters, sculptors, and photographers about whom I knew little or nothing prior to this show, and now I’m obsessed with. Dorothea Tanning paints a bare-chested woman — herself, I think — with a seaweed skirt and a winged griffin at her feet. The fascinating Lee Miller — model turned photographer, object become subject — photographs a breast removed in surgery, and then twins it. Gerrie Gutman paints a terrifyingly ghoulish statement of herself  holding a casket, symbolizing her loss of custody of her son; it made me think of Kristin Hersh. Sylvia Fein is gothic and impish. Leonora Carrington’s horses gallop and have breasts.

These are dreamscapes, fantasies, nightmares — projections from the parts of our brains and hearts that we don’t always use every day. The less we use them, I’ve found, the rarer they appear. In Wonderland inspired me to take those first moments of consciousness, and remember where my mind went wandering the previous hours.