This is not a pep rally 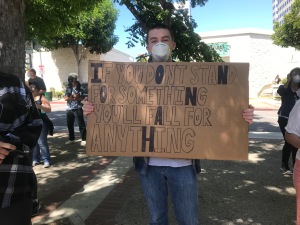 A protester in San Pedro June 6

On Saturday, June 6, San Pedro, California, had its first large gathering in response to the protests that have swept the world since the killing of George Floyd by a Minneapolis police officer. There had been smaller protests, in front of the San Pedro police station and city hall, but this morning event was the first to draw several hundred people, in  a march from the police station to city hall, followed by speeches. It looked like a demonstration; there were “I can’t breathe” posters and chants of “No justice, no peace.” Some social media commentators called it a Black Lives Matter protest. But that activist organization was not involved in Saturday’s event. Instead, it was organized by three unlikely bedfellows: The NAACP, the Los Angeles Police Department Harbor Division, and the office of LA City Council member Joe Buscaino.

Organizers hailed this as a breakthrough alliance. But skeptics — and I am one — feared that this was not a breakthrough coalition, but a cooptation. First, the march was channeled (literally, they walked down Channel Street) on to empty roads where there was no chance to engage onlookers or passersby or generally make an impact, which is pretty much the point of a march. One of the participants was controversial police chief Michael Moore, who led his officers into violent confrontations with protesters in LA earlier in the week and at one point blamed those protesters for Floyd’s death. Buscaino, a former cop, is against the cuts to the police department already agreed to by Mayor Eric Garcetti, let alone the foremost demand of BLM: Defund police. Indeed, no concrete changes were demanded or offered at the rally, except for a call to vote for change in November (agreed). Instead of singing “Lean On Me,” “Alright,” “We Shall Overcome,” or even, I don’t know, “This Land is Our Land,” a woman wailed “The Star-Spangled Banner” — as if we were at a political convention, or a football game. 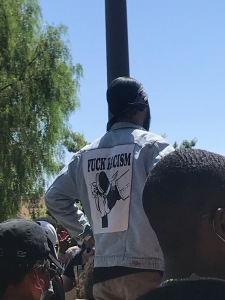 The “Unity Rally” suffered from a serious existential crisis. Many of the participants were visibly and vocally disappointed by the speeches and the presence of Moore and other cops; indeed, speeches by anyone with a badge were largely drowned out by protesters. “This is not a photo op,” they chanted at Buscaino. “This is a protest!” they shouted at the politicians. “This is not a pep rally!” they shouted — incredulously — when the NAACP’s Cheyenne Bryant ended the event by thanking folks for coming to, yes, “a pep rally.” Most people around me turned away in disgust at that point. One young man jumped up and started speaking to the crowd about his dismay with the speakers’ failure to address the real issues of systemic racism. Many stopped to listen to a voice that finally spoke to the real message of this movement.

None of this dissent made the coverage of the “Unity Rally” in The Daily Breeze and the Los Angeles Times. Reading their accounts, I had to wonder if I was at a different event. As a journalist and a scholar of journalism, I can’t say I was shocked: Mainstream news outlets typically report the perspective of the powerful, not those speaking out against power structures. Sometimes the erasure is structural; reporters hang out by the stage, instead of in the crowd, and miss the true story. But at Saturday’s event, you had to be deaf and blind to miss the shouts of the protest against the rally.

All this said, there was an incredibly moving moment that did bind everyone there — a moment that lasted eight minutes and 46 seconds, the amount of time Derek Chauvin kneeled on Floyd’s neck. Bryant asked everyone to take a knee, the  gesture made famous by football player Colin Kaepernick (one of the pioneers of the protest against police violence for years now, whose work is finally being vindicated; the NFL finally had to admit it was wrong to censure him and others). Cops, protesters, politicians, parents, kids, blacks, whites, Native Americans, Pacific Islanders, Latinx — everyone that I could see kneeled. And for almost nine minutes we were quiet. Mostly. After several minutes that seemed like an eternity, in an act of spontaneous improvisational street theater, voices rang out:

The final words of George Floyd exploded from the crowd. Staring at the ground, I began to sob. I could hear others crying around me. It was a powerful gesture that has been deployed at protests around the world. Eight minutes and 46 seconds is a long time. Long enough to take a man’s life, just because you can.

As the crowd rose, they started another chant, again, one not led from the podium: “A silent cop is a bad cop.”

I am not against dialogue. I understand that you sometimes have to sit down with your enemies if not to negotiate change, to make them change. For 8’46”, everyone in that plaza — including many police officers — had to to contemplate one man’s dying moments at the hands of another.

Gestures can be powerful. But they can also be easily imitated. What America needs is not gestures, or even words, but action. Action like that the Minneapolis City Council said they would take Sunday night: To not merely cut the police budget, or defund the force, but to disband them.