Like a good – and female – drag queen, Tammy Faye Starlite doesn’t impersonate great women; she invokes them. She’s most famous for her Nico act, Chelsea Madchen, which is smart, funny, tragic, and lovely. While aptly pointing out the anti-Semitic Velvet Underground singer’s numerous faults, she also made me appreciate her talent. I haven’t seen Tammy’s Blondie tribute band the Pretty Babies or her Runaways manqué the Stay-At-Homes. But from the way she talks about learning to portray Debbie Harry and Cherie Currie, I know she gets it.

“I really love Cherie’s voice – it’s husky and she imbues each song with both attitude and subtlety, similar to the way Debbie Harry does, although their sounds are so different,” Faye said in a recent email. “Cherie is so much fun to play onstage – she has certain signature moves – the single knee-bend, the arm flap, the squat/crouch, the Bowie-esque mime. She was definitely in command as frontwoman, which I love. I also love the L.A. inflections in her voice and her slightly Liza Minnelli-style ‘s.’ She’s a very physical performer – she bodily punctuates the beat and is full of kinetic energy. Debbie Harry is also physical, but to me she seems much cooler, much more ‘come to me’ as opposed to beseeching the audience to come to her. Nico barely moved at all – I love doing her almost catatonic stance, but it’s hard for me, in a way, because I’m inherently a spazzy freak and cliched ‘entertainer.’ (Must be my Jewish upbringing.) As Cherie, I get to be my teenage self, who jumped in front of the mirror with a hairbrush and did interpretive dances to ‘Honky Tonk Women.’ (Also, shamefully, to Billy Joel’s ‘My Life,’ but we’ll keep that to ourselves.)

“Speaking of Judaism (were we?), I think my favorite song to do is either ‘American Nights’ – it’s so gloriously anthemic – or Lou Reed’s ‘Rock and Roll’ (even though my husband pointed out that the Runaways do the Mitch Ryder version). It must be the New Yorker in me – I have to stop myself from saying, ‘She stawted dee-ancin…’ I don’t always succeed in that endeavor.” END_OF_DOCUMENT_TOKEN_TO_BE_REPLACED

Born To Be Miss Guy

Miss Guy is a Downtown legend. Before there was an imaginary Hedwig and the Angry Inch, Guy and his Toilet Boys were flipping the punk-rock script at parties like SqueezeBox and DropOut. They’re the chromosomal love child of the New York Dolls and Blondie. In fact, Guy co-wrote “Charm Alarm” with Debbie Harry and, as a sometime makeup artist, helps make the Queen of Punk look glam. A genius DJ, Guy channels the girl power of rock divas, from his Cherie Currie mane to his Dumb Blonde (it’s the name of his solo album) persona.

“I’ve always been inspired by female rockers and The Runaways are the epitome of the perfect all girl rock band!,” Guys says via email. “They had it all. And I adore Cherie and Joan!”

So Miss Guy was the perfect artist to tap for All Hail the Queens of Noise, the March 6 event at the Cutting Room. He’ll be singing a song with the Stay-At-Homes, Tammy Faye Starlite‘s Runaways tribute band. (The picture gives you a hint which song.) I’ll be talking about my book, and Theo Kogan will be the beauty queen. Proceeds benefit rock camps for girls. 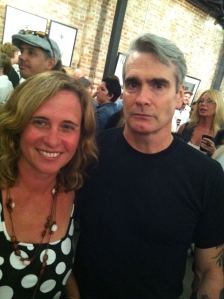 The idea of putting photos of musicians next to photos of boxers seemed dubious to me at first. The violence of the mosh pit is something I’d rather not celebrate; the dance of the mosh pit I love. But the Rock Fight show that opened last night at Project Gallery in Hollywood, copresented by the Morrison Hotel Gallery, was actually really interesting. As host Henry Rollins said, there’s as much showmanship in the ring as on the stage, and there can be an element of combat in a concert. Some of the juxtapositions of images were brilliant, like Bob Gruen’s shot of Debbie Harry next to Theo Ehret’s Luchadore. The boxing photos were all by Ehret, the music photographers included my buddies Catherine McGann and Janette Beckman. I’d have liked there to have been more images of women; let’s face it, there was a fair does of testosterone in the room.

Shepard Fairey was there; I gave him a copy of Queens of Noise and he talked about his cover art for the new Joan Jett album. He and my “date,” radio star Mandalit Del Barco, discussed public radio and Jeffrey Deitch. All in all, a cool night out.