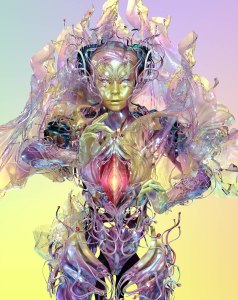 Almost two and a half years ago, Björk spilled her guts to the world. On the album Vulnicura, the often reclusive musician wrote intimately and emotionally about her breakup with the artist Matthew Barney. It was a public purging of a high-profile heartbreak, a direct and exquisitely rendered “fuck you” to a shmuck – long before Beyonce squeezed her lemons into Lemonade. “I am bored of your apocalyptic obsessions,” Björk sang on the thin ice of “Black Lake,” voicing the sentiments of a million millennial women waiting for their men to join them in the 21st century.

Ms. Gudmundsdottir is finally ending the Vulnicura phase of her astonishing three-decade artistic career. As she told me in an interview for the LA Weekly a few weeks ago, she has begun work on a new album and feels “the Vulnicura cycle is complete.” She delivered her last performance of the album at the Walt Disney Concert Hall in downtown Los Angeles Tuesday night. And what a – shall we say, in deference/reference to her infamous 2010 Oscars outfit — swan-song farewell it was.

Thirty-two string instruments directed by Icelandic conductor Bjarni Frímann Bjarnason accompanied the headlining act of the Los Angeles Philharmonic’s Reykjavik Festival. Taking the stage in a Venice-gone-Blade Runner black dress and mask, Björk immediately eclipsed the whimsy of Frank Gehry’s curved balconies and steel carbuncles. She was a raving weirdo in front of a black-clad formal orchestra in a concert hall busting to break out of its traditional confines, rippling and itching to roar. The show opened with Vulnicura’s first cut (wording intended), the pointedly named “Stonemilker.” “Show me emotional respect, oh respect,” Björk demanded, riffing on the Queen of Soul’s quintessential feminist anthem. She proceeded through the album’s exegesis of betrayal, delicately dropping an intimate f-bomb on the sold-out hall, remembering “every single fuck” of her years with Barney. Björk married and had her first child at age 20. No newcomer to romance, the 51-year-old takes love seriously – as the most serious thing. “For in love we are immortal/ eternal and safe from death,” she sings in “Notget.” Barney’s betrayal wasn’t just a personal diss; it was a deeply philosophical wrong. “Family was always/ our sacred mutual mission/ which you abandoned,” she accuses in “Black Lake.” Imaginary pan to Barney and Jay-Z, trying to cover their shame-facedness with a beer toast in some dark man-cave ring of hell while Björk and Bjeyonce high-five on the dance floor. “Now, if the guys fuck up, they fuck up,” Björk told me. “It’s not the women’s fault. We’re not swallowing that anymore.”

For the second set at Disney Hall, Björk changed architectural face and body coverings and dug back into her catalog, for the catharsis of “Joga” and “Bachelorette.” In high silver platform boots, she lunged and swayed, itching for the beats that never dropped. Björk is a versatile artist, adept before both an old-fashioned orchestra and a dope DJ. Still, Tuesday night, she seemed confined by the dearth of rhythm, the constraint of volume — like a digital girl in an analog world.

All evening, I kept closing my eyes and remembering the virtual-reality videos I had seen for most of these songs a week earlier at the Björk Digital exhibit at the Magic Box at the Reef, which is also part of the Reykjavik Festival. I appreciated and admired the orchestral sweep of the Björk and Orchestra show. But it was the VR exhibit that really blew my mind, in the way that very few artists besides Björk can.

Digital offers timed entries as you are led to various rooms for different experiences. You begin with 15 minutes to play with the Biophilia app on an iPad. That’s not enough time if you’ve never done it before, too much time if, like me, you have. Then you’re led to the Black Lake Room, an installation Björk and Andrew Thomas Huang created for the Museum of Modern Art exhibit of her work. Screens bookend the room offering different angles of filmed footage of Björk singing, shot on black volcanic rocks in her native Iceland. Speakers line the other walls. You can walk around in the dark, surrounded by Björk’s voice and image as she wails the ultimate heartwrenching breakup song. It’s a stunning piece.

From there, you’re walked through five virtual-reality videos. For the first three, your group each gets its own stool and Oculus Rift headpiece. You can rotate on your stool for the 360-degree immersive experience. “Stonemilker” was her first VR experiment and opens this portion of the exhibit. Filmed on an Icelandic beach by Huang the day after the “Black Lake” shoot, it offers an upbeat antidote to the violent catharsis of “Black Lake.” “Mouth Mantra”  is shot from inside Björk’s mouth, so now we know what that looks like.

The highlight of the exhibit is the VR video for “Family.” You stand alone in a curtained room with the headset on holding wands, which become your hands in the video. Only you’re not alone, because Björk is there with you, fully dimensional. You become part of the work by squeezing buttons on the wands, emitting trails of light from your fingers and a sweet hiss. Dancing around you, Björk moves closer and closer, until you can hug her. She is singing in your ear, and then, you can step inside her and become Björk. Or, as my friend Veronique saw it, she steps inside you and becomes you. It’s a powerful moment of intimacy and shared vulnerability. On Vulnicura, Björk celebrates the importance of keeping one’s heart open, including open to pain. In the “Family” VR video, she completely eliminates the wall between artist and audience. It doesn’t feel virtual; it feels very real. Yes, the technology that allows this is amazing, but the experience is not cold or intimidating: It’s emotional and personal, eliciting both tears and euphoria.

After Björk transforms into a moth in the “Notget” VR room, you can wind down and just watch her impressive catalog of music videos, lounging on the floor on pillows with your friends, dazzled by her virtuosity. I can’t think of another artist who has created such diverse and imaginative work in music, video, fashion, and now virtual reality. Björk Digital reveals how this technology could transform museums, not simply by creating awesome effects, but by being tools for empathy. I call Digital a must-see experience. Hurry: It ends June 4.