As promised, I’m finally posting the Critical Karaoke I performed to Patti Smith‘s song “Till Victory” at my presentations at Stanford and Studio Grand Oakland last month. I actually wrote this originally for the senior awards banquet for LMU’s graduating English majors and Journalism minors.  Critical Karaoke is a rhetorical exercise invented by UC Davis poet and professor Joshua Clover that I use frequently in my classes. The idea of Critical Karaoke is that for the length of a song, while that song plays, you speak. Probably, you talk about the song, but the way I use it in class, more often the song is a springboard for other reflections: aesthetic, personal, philosophical, whatever. Basically there’s a formal restriction within which you can do whatever you want. I pretty carefully timed this one to go with the song; I’ve put the lyrics at particular key moments in italics.

This song has been a constant companion for me since I first heard it as a teenager embarking on what the song’s author elsewhere called the “sea of possibilities.” It’s by a woman who has been called the godmother of punk, and embodies the music’s revolutionary inspiration and aspiration.

Patti Smith changed my life. Maybe, she even saved it.

I was in high school when I discovered the Patti Smith Group’s 1978 album Easter, whose tremendous opening chords you just heard. The first song, Till Victory, is a call to arms literally.

The track, which Patti wrote with her bandmate Lenny Kaye, uses an extended military metaphor, “legions of light” coming to the rescue, airplanes “in V formation,” winged victory. The song always brings to mind that sculpture of the Greek goddess, Nike, descending to congratulate the troops, bust thrust forward, wings back, the muscled lunge of her long left leg stopping the Louvre throngs in their tracks. 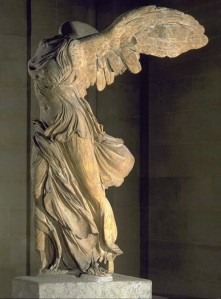 But Till Victory is not a war cry. Smith summons our souls for a victory against war. In the album liner notes, the poet offers a prose companion to the song. In this piece, she wanders the streets of postwar Europe and pays homage to filmmakers Godard and Bertolucci. These notes’ last lines make clear that Till Victory is a bid for peace, a new round of sound: “The death of the machine gun. The birth and ascension of the electric guitar.”

“The nail the grail that’s all behind thee.” 35 years before she would play a concert at the Vatican, the first priestess of punk proclaimed a new era. Souls arise from the dead, on an album called Easter, written by a winged goddess who had just recovered from breaking her neck after falling off a stage. Smith declares victory over victories, or at least the ongoing struggle towards triumph.

Music like this, art like this, calls us forward. Its maker imagines a world that could be, a world that I, emerging woman with wings unfolding to carry my big dreams out of a small town, found myself in. Till Victory became an anthem for me, that I have used ever since to rally my spirits in times of weakness and defeat, a goal post, a call to action. May it guide you as you sail out in V formation, to raise the sky.