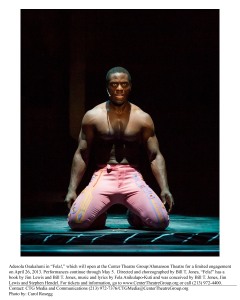 In the last month I’ve seen two shows that remind me why I love musicals. Both featured amazing scores, songs I’m still singing, days and weeks later. Both had complex, progressive political and social texts that exposed Broadway (and LA) audiences to musical cultures foreign to the Great White Way. One featured a jaw-dropping, career-defining performance; one, a star turn better than that by the famous actress in the film. But in both Fela! and West Side Story, it was the dance that really made me bow down in humble homage to the skills of two of America’s greatest choreographers – then get on my feet and want to snap my fingers, shake my ass, and leap across the stage.

I grew up with West Side Story: a yearly ritual of watching the TV broadcast of the 1961 Oscar-gobbling film version. I inherited my love of musicals from my mom, who was named after Shirley Temple and always mourned not having pursued her dreams of being a singing star. I knew Sondheim and Bernstein’s smart, pulsing songs by heart by the time I was 10. They provided me an early education in New York, Nuyoricans, gangs, and immigration.

The version that played the Pantages is the one that was revamped in 2009, with more of the lyrics in Spanish. I think it’s the first time I’ve seen West Side Story on a stage. The music sounded great. The love scenes in the Romeo and Juliet derived plot were a bit belabored, but the slapstick “Officer Krumpke” was wonderfully ribald. Mary Joanna Grisso played Maria with more spunk and depth than Natalie Wood did. But it was the way Jerome Robbins sent those Sharks and Jets leaping and tumbling and punching across the stage that thrilled me more live than a screen ever could. Robbins found the ballet in fighting, and the fight in ballet. Cole, who I took with me, and his friend ran and jumped their way out of the theater. I wanted to follow suit.

I’ve been dying to see Fela! since it opened in New York, and I had tickets to see it last year at the Ahmanson, but wound up out of town. I couldn’t believe someone had made a musical about the great but controversial Nigerian musical legend, and that it was supposed to be really good, according to no less a source than my dear friend Vivien Goldman. Vivien knew Fela; she hung out at his famous Lagos compound; one of her many articles about him is in Rock She Wrote, my first book. In fact, Vivien came to LMU April 18 to speak with Nigerian Nobel Laureate Wole Soyinka about Fela, Bob Marley (also her old friend) and post-colonial art and activism. Wole, who I doubt suffers fools gladly, praised the musical too.

Fela! is spectacular. The Afro-beat music – of course, it’s by Fela Anikulapo-Kuti – makes it hard not to want to get out of your seats. Fortunately, Adesola Osakalumi as Fela encourages you to do just that. The costumes are funky, tribal, sexy, cool. And Osakalumi’s performance is phenomenal, virtuosic, epic. He has a beautiful voice, a ridiculous body, he plays sax, he commands the stage the entire show because he’s never not on stage. He’s an undeniable, unstopabble force. (Oh yeah, Michelle Williams of Destiny’s Child was in it too.)

But again, it was Bill T. Jones’ choreography that put into motion all the play’s complex emotions and story: oppression, liberation, love, brutality, shamanism, ecstasy, death. Fela’s dancers wind and grind like prima ballerinas of the booty. Who knew hips could do all that – hit every hour of the clock, and all the minutes too.

Both Fela! and West Side Story were largely brain childs of their choreographers. And that’s really the heart of the musical, not just to break out into song, but to break out into song and dance. I have a colleague who thinks all musicals are corny. On the contrary, West Side Story and Fela! remind me that at their best, song and dance take us out of prose and pose and into poetry and art.