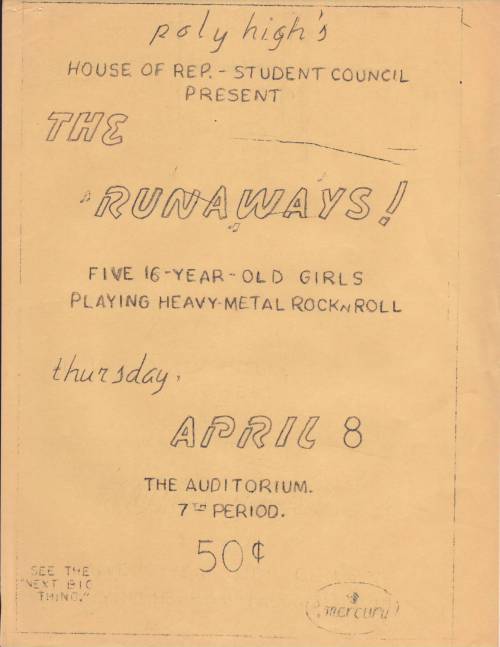 Imagine you’re a teenager in suburban Los Angeles and a band of hot female rockers — all of them your age — comes to play at your high school. They sing songs about keeping secrets from their parents and cherry bombs, which seems to be about the blond vixen singer. Cool, right? Well, only if you are.

On April 8, 1976, the Runaways played Francis Polytechnic Senior High school in Sun Valley, California. The gig was a favor of sorts to Lisa Fancher, a Poly High student who also happened to be a writer for Bomp Magazine. Her story “Are You Young and Rebellious Enough to Love the Runaways” was one of the very first features on the all-girl group. As a sister teen, Fancher “got” Jackie, Joan, Cherie, Sandy, and Lita in a way that later boner-driven scribes for Creem and Back Door Man didn’t. (Uber-rock critic Lester Bangs wrote a screed for BDM about his hots for the Cherry Bomb).

“The Runaways are the girls ‘Rebel Rebel’ was written for: don’t-care angels in tight blue jeans with one foot entrenched in their music and the other in a circle of fascinated guys,” she wrote.

But having the band, who had yet to release a record, play at her school didn’t turn out all Rock’n’Roll High School hunky dory. Most of the 100 kids who even bothered to show up scoffed at the Runaways and thought she was a geek for booking them, says Fancher, who went on to found the seminal punk and Americana label Frontier.

“Everybody there was an asshole anyways so after a girl band played they were like, What is this crap? They hated it.”

One response to “Rock'n'Roll High School”